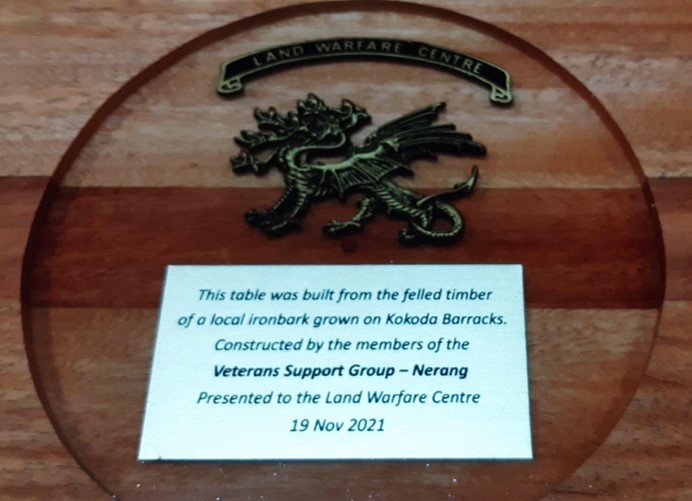 The Veterans Support Group Men’s Shed project to build a table for the Commander of the Land Warfare Centre at Kokoda Barracks Canungra was first discussed earlier this year as a result of a connection between the LWC and Padre Gary Stone at a mutual event.

After ascertaining that the Shed had the know how and talent to build the table, plans were firmed up, and work commenced in Late September with a delivery deadline of 19th November 2021. Then followed many hours of gluing, cutting, sanding, more sanding and many coats of clear gloss by Wozza, with many inputs and opinions from various shed members, some solicited, but most not.

On Thursday 18th November, the table was declared finished, the army notified, and subsequently the table was picked up for delivery to the LWC. The Commanding officer, Colonel Diane Grey, knew “a table” was being built, but did not know any details. A special morning tea was arranged for the presentation of the table at Kokoda Barracks to Colonel Grey on Friday 19th, and Wozza, Kevin and Andy were invited to attend the ceremony on behalf of the Veterans Support Group Men’s Shed.

With everyone gathered around, the table was revealed by removing a ubiquitous army blanket covering, to the delight of not only Colonel Grey but all who were in attendance. The table’s craftsmanship was admired by all, but the Commander seemed particularly pleased, both with the table and the sentiment. The timber for the table was donated by the LWC, having come from a tree felled on the LWC grounds some time ago. A small plaque, detailing the history of the timber and the subsequent build, together with the LWC insignia, has been inset into the centre of the table as a permanent reminder of its origins.

Colonel Grey’s speech at the presentation ceremony commented on the collaboration between the LWC and the Veterans Support Group, and expressed her wish that more such projects and interchanges would be forthcoming in the future. The feeling and wishes being shared by both parties. 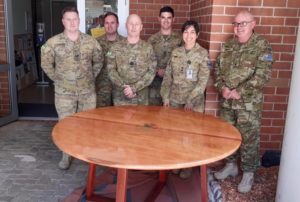 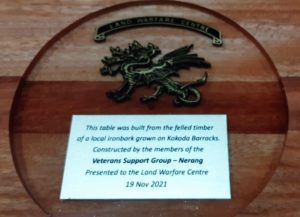 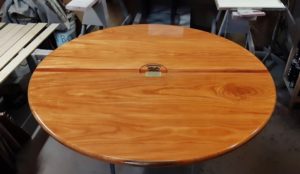 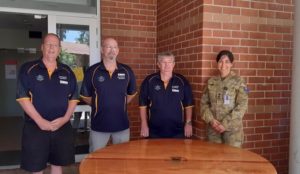